A little bit about me... 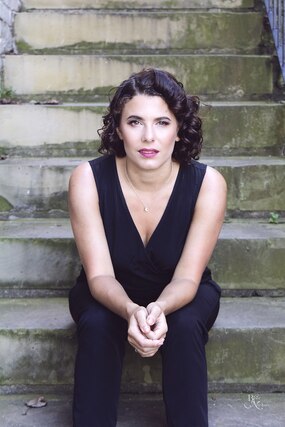 Mezzo-soprano, Rebecca Sacks, is known for her dynamic stage presence, smart musicality, and stylistic versatility. In the summer of 2019, audiences saw her as Queen Alkmene in Pittsburgh Festival Opera’s production of Strauss’ rarely performed masterpiece Die Liebe Der Danae where she was praised for “engaging” and “tuneful” performance (George B. Parous/ PGH in the Round). Also at Pittsburgh Festival Opera, she made her Wagnerian debut as a member of Jane Eaglen’s Mastersingers Program for Young Dramatic Voices, singing the role of Grimgerde in The Valkyrie and performing scenes from Tristan und Isolde as Brangäne.

In the spring of 2020, she joined Fargo-Moorhead Opera as a Gate-City Bank Young Artist, performing the role of the Waitress in Michael Ching’s Speed Dating Tonight!. She was additionally slated to perform Mamma Lucia and cover Santuzza in Cavalleria Rusticana. In July of 2020, Ms. Sacks will sing the role of Fricka in Das Rheingold with the Miami Wagner Institute.

A champion of new music, Ms. Sacks has premiered concert works including  the premiere of Bradley's The Prayer of Saint Francis with University of Oregon’s Composer’s Symposium. She additionally participated in a premiere recording of Simon Hutchinson’s opera, A Lawn in the Sky, with the Tai Hei Ensemble in Eugene, Oregon.

Ms. Sacks’ concert repertoire has included Händel’s Messiah with the Bravo Chorale and Monteverdi’s Vespri della Beata Vergine of 1610 with the Stanford University Singers as well as multiple concert performances of Pergolesi's Stabat Mater with Ping & Woof Opera and performances of Vivaldi's Gloria in Atlanta.  In 2019, Ms. Sacks had the special opportunity to perform excerpts from Berg's Sieben Frühe Lieder and Mahler's Lieder eines Fahrenden Gesellen as part of Pittsburgh Festival Opera's Entartete Kunst concert, celebrating the music of artists whose output was stifled by the Nazi regime.

On the competition circuit, Ms. Sacks was awarded 3rd Place in the 2019 American Prize in Opera, the Berstein Award in the 2018 Orpheus Competition, and fifth place at the 2016 National Association of Teachers of Singing Artist Awards. She has additionally received awards from the Classical Singer Competition and the Metropolitan Opera National Council Auditions.

A Northern California native, Ms. Sacks began her vocal training in musical theatre before studying voice at Stanford University. She then received her Masters of Music from the Hugh Hodgson School of Music at the University of Georgia in 2018.